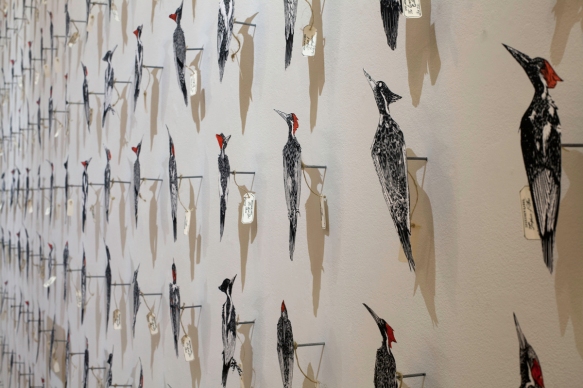 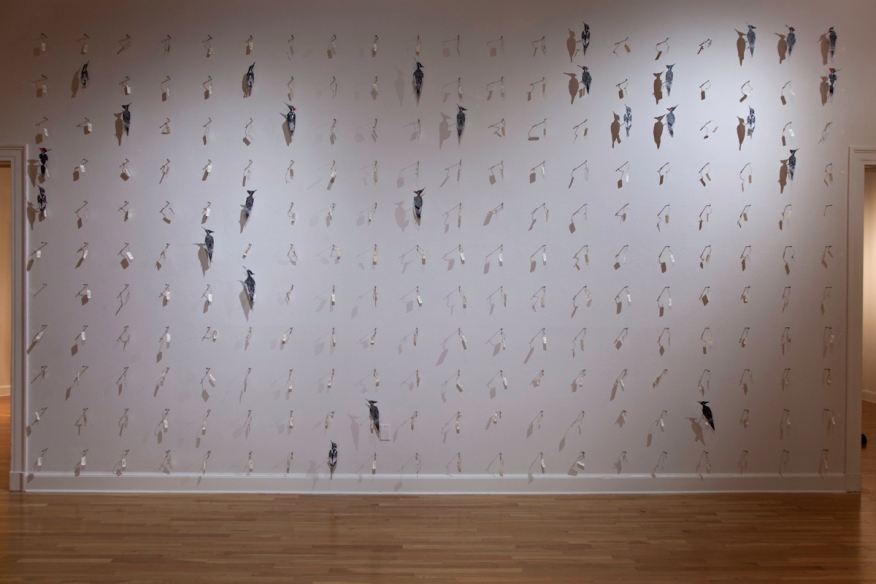 The Ivory Billed Woodpecker was the largest species of woodpecker in North America. Once a prominent species within Louisiana, they were last sighted in the 1940’s and are believed to be extinct. This extinction was entirely a man-made phenomenon due to the taking of the birds and their habitat for human uses. Since I never have and will never see an ivory billed woodpecker flying overhead, it is impossible for me to create a lived experience of this bird. Cancelled Edition instead creates the lived experience of its loss. It reflects on the 19th century practice of hunting and collecting, and it springs from questions about the dominance of man and the consequences of extraction. Through encouraging interaction, this installation invites viewers to participate in the instinctive and destructive possibilities of man.

Each bird is individually displayed on nails with small magnetic connections. Each has a serigraphy specimen label, and the males have hand-painted red heads. The nails are mounted an inch and a half off of the wall so that the birds appear to float. They are gridded on the wall with a bird set every twelve inches. Also, with a strong LED light the birds cast hard, ghostly shadows on the wall. Canceled Edition was designed to cover an entire wall from floor to ceiling so that through printed multiplicity, the work initially feels like an enormous, never-ending collection of ornately printed birds.

Viewers are then encouraged to remove the birds from the wall and take them home. Instructions on a pedestal in the middle of the room encourage this interaction with Canceled Edition. Along with some writing about the piece, the pedestal will have cut-out labels that declare themselves as hunting licenses and direct the viewer’s attention with questions like, “How Many Are Left” and “Did You Take the Last One” and “What, for you, is rare?”. In exchange for filling out the form, the viewer is encouraged to take a woodpecker off the wall, either by hand or with a magnetized pole. One by one as the show progresses, each bird disappears, leaving only their small specimen labels, which incriminate us all, declaring “Greed”, “the Consequence of Collection”, and “The Cost of Hubris”. They illuminate a desire within all of us to take and own a unique object, while simultaneously reflecting upon the complicated history of human impact on the planet.

Environmentalism has often been simplified by a black/white, good/bad dynamic: paper or plastic, poach or conserve. But the science of a warming planet shows the nuances of collective human consequences that each of us must now wrestle with. This piece intends to lift the shroud of innocence and demonstrate that in a world shedding species at an hourly rate we are all connected. Canceled Edition explores innate human desires with the hope that a more honest understanding of those desires can contribute to a better understanding of how we live on this planet.

This installation was first shown at Tulane University for Pippin’s MFA Thesis show. It will be on display at the Urban Institute for Contemporary Arts (UICA) in Grand Rapids, Michigan from September 12th till December 10th and at the Contemporary Art Center (CAC) in New Orleans August 5th till October 7th.

This project took thousands of hours and many helping hands. Thanks to the Newcomb Art Department at Tulane University, Pippin’s parents, Chris Staudinger and many others.